Why Electric Motorbikes Are The Best

We all know the benefits that come with electric cars and vans. They’re ‘green’, cheap to run and their increasing credibility is making them more and more popular for everyday use. The question today however – what about electric motorcycles?

Although their popularity is increasing, we don’t see them as often on the roads as we do their petrol siblings. With their range and speeds increasing however, we think this is about to change. In fact, we’d go as far as to say that we may be on the very cusp of an electric bike revolution.

The Electric Motorbike – The New Must Have 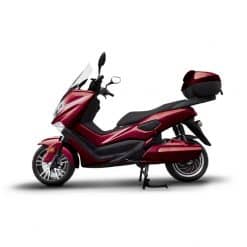 The Benefits Of Electric Bikes

To give you an insight into why, here’s a little ‘Electric Motorbike vs. Petrol Motorbike’ rundown. Take a peek at why people are now turning toward the electric motorbike more and more.

Running Costs Are Much Less

Just as you’d find with electric cars, battery powered motorbikes have a huge advantage when it comes to fuel costs. Take the Model 40 Electric Motorbike for instance. On just one charge you can expect a range of around 110 kilometres. While its top speed of 40mph may not be breaking any records, it’s hugely economical and the ideal choice for those nipping in and around the city centre.

If you’re looking for something faster such as the Model 75 Electric Motorbike, you can of course expect slightly less range however, with speeds of 75mph, you’re getting a little more oomph underneath you.

Despite the ability to hit the motorway and effortlessly keep up with the traffic, you’ll still find a bike like this offering a decent range on one charge. Compare this to the likes of the more common 650cc gas guzzlers currently zipping up and down the roads today and you’d be surprised that even with the faster models, just how much money you’d save. You can also say goodbye to the likes of tax and costly maintenance costs too.

Now isn’t that a very appealing thought? Granted, while many are huge fans of minimal maintenance, we do recognise that there are many out there who would consider themselves ‘professional tinkers’ spending their weekends tinkering with their bikes.

For some bringing out the paddock stand and the drip tray is just part and parcel of bike life and so, an electric bike would perhaps miss that significant part of their hobby. For those who like an easy life however, an electric bike is the perfect choice.

Do you hate that moment you turn the key in the ignition early morning before the commute? Your petrol engine motorbike wakes up your entire street and continues to roar all the way to work? Now while we can’t argue that the sound of a good engine revving on something like a Kawasaki sports bike is amazing, we do recognise there are times when it’s just not wanted.

If you live on a street where young families and elderly people call home, you may begin to find yourself getting more and more unpopular by the day. The beauty with electric motorbikes however, is that they are almost whisper silent. While some do indeed offer an artificial engine noise, you can choose to simply glide off into the sunset without so much as a curtain twitching from your usually angry neighbour.

Electric Motorbikes Are The Way Of The Future

While petrol engine motorbikes will always have a place in our hearts, there’s no doubt about it, electric motorbikes are indeed taking over and for good reason too. Money savings, lowered maintenance and neighbourly disputes aside, they’re just better for the environment.

With the government encouraging everyone to choose electric, thanks to the introductions of the Ultra Lower Emission Zones, the question really is, why wouldn’t you choose an electric motorbike?

In the new season of Spitting Image, produced by the BBC, Mark Zuckerberg, the founder [...]

There is no doubt that this appalling Covid 19 virus is affecting us in many [...]

Many of our bikes have individual security fitted- electronic alarms and ignition locks etc but [...]

Twist And Go Electric Bikes: What You Need To Know

Twist and Go electric bikes often create a huge amount of confusion within the UK. [...]

One of the biggest reasons people turn to bikes or electric bikes is for the [...]

What Speeds Do Electric Bikes & Mopeds Go Up To?

When it comes to electric vehicles, so many naturally assume that owning one is anything [...]

We use cookies to ensure that we give you the best experience on our website. If you continue to use this site we will assume that you are happy with it.Ok